Week one of pregnancy is before the pregnancy happens!

If you are coming for an early scan at Lollipop 4D Baby Scans and are unsure of your dates, we will ask you when the first day of your last period was. This is when the 40-week due date occurs, but you will only conceive 2 weeks after the first day of your last period. So, your body is ready for ovulation and a few days after your period starts an egg will begin to mature and your womb wall is beginning to thicken in preparation for the egg to be implanted.

This is a hugely important time in pregnancy, so it can be time to look at the health of baby. Folic acid is very important in the development of baby and it is recommended to take folic acid if you are trying for a baby. Of course giving up alcohol and smoking is recommended by health professionals if you’re trying for a baby. Obviously nothing is more important than the health of your unborn baby so it is essential you are in the best shape possible and diet is the key to this.

How big is baby: There’s nothing there yet but will be soon!

This is the week ovulation will occur, usually at the latter part of the week. Amazing things are happening as the egg is released into the fallopian tube ready for fertilisation. Once fertilised, no more sperm can enter the egg. This is now the time where the egg splits into cells which will ultimately keep dividing and is what makes up baby including the organs and sex. Even though we can’t ascertain the sex until 15 weeks, it’s actually already decided at this stage, it’s just too small to tell.

This is one of the most important weeks of pregnancy as it is when the actual pregnancy happens. We scan lots of babies but the miracle that is the start of new life never becomes mundane. We are so unbelievably privileged and lucky to be able to see so many babies start their lives.

If you haven’t already it’s very important to start taking the recommended amount of folic acid to prevent certain conditions.

The fertilised egg continues down the fallopian tube, towards the uterus for a few more days. Baby is now what is known as a blastocyst which is effectively a fluid filled ball. The cells on the inside will grow into baby with the outer parts forming the protective placenta. In this short period of time, it has grown from 1 cell to over 100 cells and up until 8 weeks is known as the embryo. The embryo implants itself in the uterus and this is where it will stay until they are ready to arrive in your life. The implantation stage can result in a little bit of bleeding so bear this in mind if it coincides with your dates.

The egg contains 46 chromosomes, 23 from each parent and mum always gives the X chromosome. Dad can either give another X for a girl or a Y for boy! So it is Dad’s decision whether baby is a boy or a girl as it comes from the sperm. Even though you still have a few weeks to go until it’s big enough for us to see at your 15 week early gender scan.

How big is baby: Tiny, tiny

Again, amazing things are happening this week as the nervous system and blood vessels begin to form and the embryo now has three layers which are the building blocks of baby. The outer layer consists of the teeth, skin and the nervous system. The middle layer will be the skeleton, muscles, kidneys, blood vessels and the heart and the inner layer will become of the pancreas, lungs, liver and digestive system. They will also be sleeping for parts now too!

Although you may not be feeling any symptoms as such, if you’ve had a positive pregnancy test now would be a good time to contact your GP surgery to organise a midwife appointment.

How big is baby: A seed (still under 3mm) 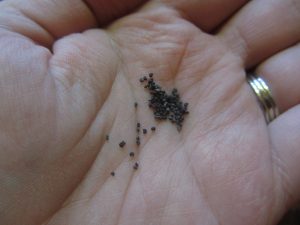 HOW SOON CAN YOU GET A POSITIVE PREGNANCY TEST?

A pregnancy test measures the level of HCG (Human chorionic gonadotropin) in urine. It is advised to use the first urine of the day as this will have the highest concentration of HCG. Usually pregnancy tests can be used from the date of the missed period, approximately two weeks from conception and WEEK FOUR of the pregnancy. However, these days there are many very sensitive tests available which can detect very small amounts of HCG, sometimes as early as 8 days after conception! This is almost a week before a missed period. When buying a pregnancy test always check the label to see what levels of human chorionic gonadotropin it can detect to check how sensitive the test is, especially if you are testing very early.

WHAT ARE THE VERY EARLY SIGNS OF PREGNANCY?

Unfortunately the very early signs of pregnancy are often the exact same signs of an impending period and it can be hard to distinguish. Sore boobs, food cravings, feeling tired, back pain, mood swings, cramping, bloated can mark the hormonal changes associated with early pregnancy and also periods. Other signs can be associated to just pregnancy alone and include nausea/vomiting and darkening aureolas. The surge in pregnancy hormones makes lots of women feel nauseous, a feeling that hopefully subsides as the pregnancy progresses, but for the unfortunate few lasts right through! The increased hormones can also affect the look of the aureolas, making the area around the nipple much darker in appearance. Some women find they have a goosebump type area develop around their nipples also, this is called Montgomery tubercles and it is actually what helps to lubricate the nipples during breastfeeding.